Political party volunteers get our vote 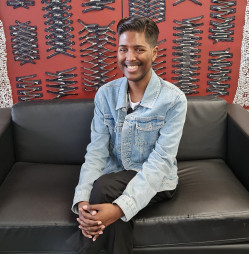 From Twitter to treading pavements
Daniel’s family returned to New Zealand in 1993 following a seven-year stint in Fiji, to a country governed by National under Jim Bolger. Daniel struggled to find his place at times in a culture that shifted with the contrasting policies of successive Labour and National governments, making him painfully aware of the effect of politics on the lives of ordinary New Zealanders.

Now a law student, Daniel hadn’t followed a political calling but, under Adern’s leadership, felt drawn to party values he saw playing out on a global stage. Values that closely aligned to his own. “I’m very outspoken about political issues and have always had a desire to do work that makes a difference in people's lives” Daniel explained. “There are many ways I could do that within not-for-profit organisations but government, in particular, has such a massive impact on our daily lives.” So, he decided to take the plunge and trade in Twitter political debating for the experience of working in the thick of a political campaign.

Lending Labour a hand
With a general election just around the corner, volunteers are in high demand as a nation is swept up in a flurry of campaign trails, rallies and party political broadcasts. Daniel volunteers three days a week as part of a Volunteer & Supporter Team of 300+ who help out with a range of political activities. He organises one-to-one meetings between Northcote Labour MP, Shanan Halbert, and local businesses, community leaders and members of the public. Mapping out “street meets”; gatherings that give the general public a chance to speak to their MP in the heart of their community, keeps him busy. Behind the scenes, his team are also hard at work phoning constituents to check how they’re doing and answer questions about voting.

Daniel is passionate about getting people involved in the democratic process and voter apathy is an issue that makes him bristle. “We’re so lucky to live in a country that has a democracy we can all participate in and it’s important to recognise we have the power to be included in the decisions our governments make. If I can encourage someone to vote for the first time and feel like their vote is counted, then I’m happy” he said. Visibility, he believes, is key to mobilising voters. “I really appreciate politicians who make an effort to gain my support and are visible in the communities they serve. It demonstrates to people that anyone can participate in politics.”

Getting involved
Daniel has found volunteering for a political party a satisfying experience that provides an education in how democracy works from the ground up. He’s heartened that “old fashioned politics” remain the lifeblood of campaigning, allowing voters to interact with politicians in their neighbourhoods. His advice to anyone thinking about getting involved in supporting a political party? “We all like to talk about politics but few actually get involved. By volunteering for a political party, I feel like I’m making a difference instead of just talking about it. Find a party that aligns with your values and the things you’re passionate about, then get in contact with their local office and ask how you can get involved.”

Are you volunteering to support a political party? We’d love to hear more about your experience. Send us your story to: gm@volunteeringauckland.org.nz

Warbler creates brands and communications with a heart. They make causes and organisations stand out from the crowd by finding their authentic voice and creating a dialogue around the things that make them great.

I started working to help the birds, and the wonderful people I work with keep me going.