Being confident in my abilities 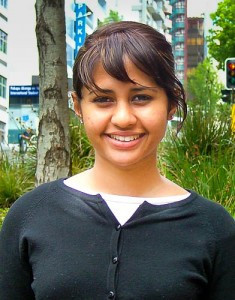 Sanoja Lokuliyanage is twenty-two years old and in her final year at AUT. She is studying a Bachelor of Communication, majoring in Advertising Creativity. She says, “I chose to do this degree mainly because I wanted to become an art director maybe in an ad agency or in another industry. The major I chose allows me to develop as a creative person”. She decided to volunteer so that she could develop her technical and personal skills in a “non-pressured environment”. She also wanted to meet new people.

While doing a search for volunteer work online, Sanoja found the VolunteerNow website, which has all of Volunteering Auckland’s jobs listed. When she found a volunteer job that interested her, she rang Volunteering Auckland and made an appointment with Volunteer Central, which is a satellite office in the city. In regards to registration, she says, “the questions I had to initially fill out at the Volunteer Centre were comprehensive and made me think twice about what I wanted to focus on and what I hoped to gain from the whole volunteering experience.”

Sanoja was then referred as a volunteer graphic designer on a flyer for Communicare, which is a day centre for the elderly, disabled and lonely. “I designed a flyer as well as a billboard/poster to increase awareness of this centre. As soon as the flyer is printed it will be put into mailboxes and the billboard/poster design may perhaps be used next year.” Because working for Communicare is like taking on a freelance project, she had no set volunteer hours and did the designs from home. Initially, she met up with the volunteer coordinator from Communicare, and they discussed ideas about the flyer and later the billboard/ poster. In the end they were very pleased with the mock-up of the final.

According to Sanoja, one of the benefits of volunteering is that it helped her to gain more confidence in her abilities. “Volunteering is a good way to use your skills in a non- stressful environment. Volunteering allowed me (for at least a moment) to do something more meaningful and bigger than I am and the ambition/status driven culture I’m surrounded by.” In addition, she says that volunteering for Communicare made her feel good. “ It felt great to see their excitement and appreciation towards my work. I thought they were kind people who were full of personal warmth. I’m glad that I met them and made them happy in some way.”

Like many people who come to New Zealand I arrived with many dreams.