For the love of the Sea - 25 years of Volunteering 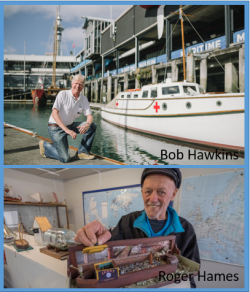 Two men who share a love for the sea are celebrating their 25th year as volunteers at the New Zealand Maritime Museum.

Roger Hames and Bob Hawkins have been mainstays at the Museum almost since it first opened its doors in 1993.

Mr Hames, a former chartered accountant, volunteers as a model boat maker every Thursday. As well as precisely building exact replicas of boats and ships, he brings a batch of freshly baked muffins to share with the Museum team every Thursday morning - that's around 31,000 muffins and counting.

“I make muffins because they’re the only thing I know how to make. My wife Maggie does most of the cooking at home,” he says.

Roger was introduced to model boat making in his late teens when a friend, who was in the hospital with Pleurisy, was given a cardboard model battleship by his parents to keep him entertained.

He was always good with his hands and the rest he learnt by “just doing it,” he says.

He has made models of several significant boats, including the TIRI, the original Radio Hauraki vessel which broadcast from the Hauraki Gulf in the 1960s, the RMS NIAGARA and the HMS RESOLUTION.

Roger always finds a way to inject his quirky sense of humour into his work and can be found in the miniature versions of his likeness as the Captain at the helm of several of his model ships.

He donates the profits from the models he sells to either the New Zealand Maritime Museum or to charity.

“If you try and make money from a hobby it kills it,” he says.

Bob Hawkins volunteers twice a month as a skipper on two of the New Zealand Maritime Museum’s vessels, the SS PUKE and the NAUTILUS, taking Museum visitors sailing on the Waitematā Harbour. He is also a sailing master on the brigantine BREEZE, the Museum’s traditional wooden sailing ship which is currently undergoing a major refit.

Bob has always loved being on the water, starting out as a Sea Scout when he was a boy before joining the Merchant Navy as a 17-year-old.

After leaving the Merchant Navy he worked at a shipping agency at the same time as undertaking his own ship brokerage, before finally getting in to marine surveying.

“My wife jokes that all I know is ships,” he says.

Bob’s favourite part about volunteering is interacting with the wide range of people onboard his sailings and sharing his knowledge of New Zealand’s maritime history with them.

“We get such a variety of people through the Museum, from locals to tourists, boating fanatics and young students. Sometimes they even teach me a thing or two!” he says.

Vincent Lipanovich, Director at the New Zealand Maritime Museum, says not only are volunteers vital to the day to day running of the Museum but they also contribute a vast range of knowledge and expertise due to their different backgrounds.

“All of our volunteers have unique stories about what draws them to the sea and how they came to be involved with the Museum.

From people like Bob who are sailing fanatics to those like Roger who just kind of fell into it, our volunteers come from such a wide range of backgrounds and everyone here has a story to tell,” he says.

Volunteers at the New Zealand Maritime Museum have worked more than 360,000 hours since the Museum opened in 1993.

It currently has 158 active volunteers who play an important part in the operation of the museum including bringing experiences to life for visitors on board its heritage vessels, helping to maintain the fleet, and promoting the Museum and New Zealand's maritime history in their communities. In return, volunteers enjoy learning new skills and meeting new people.

If you are interested in becoming a volunteer pop in and fill out an application at the front desk. Museum entry is free for Auckland residents so why not explore New Zealand’s maritime history while you’re there.

Saving lives on the water

I moved back to Auckland after 10 years away. I've always done some sort of volunteer work...this time I decided to try something different