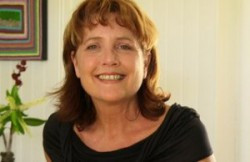 Moya Sayer-Jones is the founding human of Only Human, Sydney, and is hooked on story. The first seeds to Only Human were planted in 1998 when she was approached by Uniting Care Burnside to develop a book of stories about families experiencing great disadvantage.

Her background is in writing and broadcasting and at the time she was a novelist and a comedy writer.

Moya is a graduate of Sydney University and the Australian Film and Television School, a novelist with Penguin Books, a broadcaster (ABC radio), columnist (SMH/Good Weekend) and corporate speaker. Only Human works with organisations throughout Australasia on a range of communication projects helping them gather and use stories for brand management, engagement, change management, leadership and culture change.

I volunteer because for me to live means to give and to share. The more things I can do for society, the happier I will be.