BNZ Volunteers at the Auckland Zoo 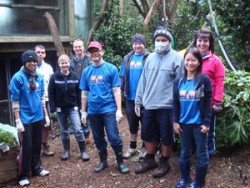 One Thursday nine volunteers from BNZ spent the day helping out at Auckland Zoo.

BNZ employees can take two days paid volunteer leave in addition to annual and other leave. They are encouraged and supported to get involved in their local communities and charities.

The volunteers started their day at 8am in the siamang enclosure at the Zoo for some weeding. As Jo Koller, Product Manager Transactional Banking said: “It was like gorillas in the mist… a very fine rain fell while we were weeding in the siamang enclosure, with the siamangs over in quarantine making their territorial calls... very cool!” They also met the famous Awani, who, according to the zookeeper, is about to be introduced to a girlfriend. The highlight of the trip for the group was the opportunity to enter the cottontop tamarinds’ enclosure while the five tamarinds were inside. The tamarinds watched from the comfort of the tree branches as the BNZ team worked on removing flaxes.

All in all, the team had an amazing time and enjoyed being part of the great work going on at Auckland Zoo.

Like many people who come to New Zealand I arrived with many dreams.